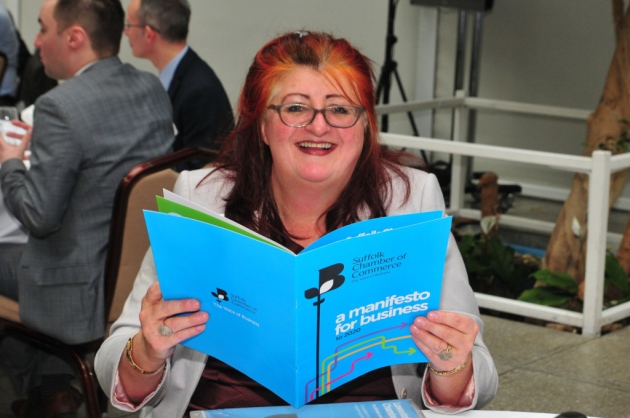 The number of CEOs called ‘Dave’ still outnumbers all female CEOs in the FTSE 100.

“Quite often, I’m the only woman in a room full of men” – one of Suffolk’s top female business leaders speaks up.

Women are half as likely to start a business than their male counterparts, and the gender pay gap is affecting women in every profession and at every level.

But one Suffolk’s businesswomen is determined to buck the trend, by getting more Suffolk women into board positions.

Jules Shorrock is managing director of Citrus Security Shredding, based near Beccles, and is also the first ever female chair of Suffolk chamber of commerce, Lowestoft and Waveney area.

Because of that, she is often invited to represent the Chamber at events featuring directors and chief executives from utility companies and infrastructure projects. “Quite often, I’m the only woman in a room full of men,” she admitted.

“With the infrastructure meetings, I was reasonably quiet at first, I sat back to get a measure of what it was all about. But then I gained the confidence to start asking questions. If you ask sensible questions, people pay more attention to you. You have to stand up for yourself and not let people bully you – then, people respect you more.”

A lot of the work that Ms Shorrock is involved in is about raising aspirations for women, she explains, because: “Its important for us to lead from the front. “I am mentoring students in Lowestoft to become more aspirational at school. I want to inspire young women, I think it makes a lot of difference. At the Suffolk New College Awards evening recently, many of the students who won were studious and dedicated young female engineers. We are now seeing an improvement in skills for girls. ”

Ms Shorrock says that while the Chamber is now talking more about flexible working hours and how this can help men and women in their careers, she feels she is often “preaching to the converted.”

“I would like to speak to the men in the boardrooms,” she said. “We need to get everybody on board to work in our ageing economy – we have to invest in the training of men and women, because we need them both.”

Ms Shorrock says that a lot of the people she meets through her work don’t agree with a push towards making female representation on boards mandatory. “But I think its important to get men to hear the message,” she says.

This week, the treasury launched a review into the barriers facing women in business.

Ms Shorrock has managed to overcome one of the barriers women face, of having to juggle work with doing the school run, by sending her son to boarding school on weekdays. “I couldn’t do what I do if my son was at home,” she admits. “For me as a business woman, his schooling is money well spent. It means I can concentrate on growing my business.”

The treasury has appointed Alison Rose, chief executive of Commercial and Private Banking, to examine barriers faced by female entrepreneurs as part of its review, which will be published in the Spring.

She said: “If we want to strengthen the UK’s position as one of the best places in the world to start and grow a business, then no-one can be left behind. Unfortunately, statistics show that women make up only a third of all entrepreneurs in the UK – to better drive the UK’s economy, we need to understand, and tackle, the barriers and reasons as to why this is – more can be done to support women in enterprise. I am looking forward to working with the Treasury on this important initiative.”